I am a ponderer. I think about all sorts of things. That is why I chose the title of my column — Just Thinking. As I have pondered experiences of life, I often think “What if?” So, in this article, my focus is to get readers to also ponder “What if?”

Scriptures to Set the Tone

“What if God, although choosing to show his wrath and make his power known, bore with great patience the objects of his wrath —

prepared for destruction? What if he did this to make the riches of his glory known to the objects of his mercy, whom he prepared in advance for glory — even us, whom he also called, not only from the Jews but also from the Gentiles?” (Rom. 9:22-24 NIV)

Just think… things would be different if God had chosen to do things by other actions. You may be familiar with the question, “In view of the situation today, what if things had been different?” Or maybe you have had someone ask, “What if you had married someone else?” “What if?” poses much for us to consider, especially in the realm of biblical truth.

• What if God had said, “These people are too sinful. I will never bestow My love on them”? There is one thing we must say — “We are so glad it didn’t happen that way?”

• What if Joseph’s brothers had killed him instead of selling him to the caravan of traders? Simply, the course of the human relationship with God would have been much different. If that had not occurred, the Jewish nation would never have been in captivity for some 400 years.

• What if Isaiah had said, “I’m not available! Send someone else”? One of the greatest books of the Old Testament would not have been written. There would not be that wonderful promise of Isa. 9:6-7, prophesying the virgin birth of the Messiah. Just think… when men have been given volition from the Almighty, they have the opportunity to say, “yes” or “no.” I am so glad Isaiah responded by saying, “Here I am Lord. Send me” (Isa. 6:8).

• What if Jesus had said in the Garden, “Father, I can’t go through with this. Not your will, but Mine? Find another Sacrifice”? The songwriter penned, “Had it not been for a place called Mount Calvary, Had it not been for the old rugged cross, Had it not been for a man called Jesus, then forever my soul would be lost.” What if, while on the cross, Jesus changed His mind and called 10 legions of angels to deliver Him from the crucifixion? You and I would still be lost in our sins.

• What if those of the early church had said, “Jesus left us alone! We can’t make it without Him to lead us. Let’s go back to our Jewish roots and religion”? Belief in Christ is one thing; obedience to Him is quite another. Today, in 2021, we are blessed because of the obedience of those early believers. May those who come behind us be blessed because we have been obedient as well. That brings us to the last question to ponder.

From Joseph to Moses to Isaiah to Jesus Christ, all these “what ifs” are important to our generation today. If Joseph hadn’t been where he was, Moses would not have been where He was, and if Isaiah had not been willing to go with God’s Word, the promise of the Messiah would have been hidden. If any of those had been different, the Good News for us would have been altered.

As we enter the Christmas season, may we be willing to be obedient to carry with us the Good News of salvation to those with whom we live, work, go to school or have recreation. The Gift we have received is too priceless not to share with others.

Well, as I have pondered, these are some things about which I was just thinking. I hope these have also been a catalyst for you to ponder. 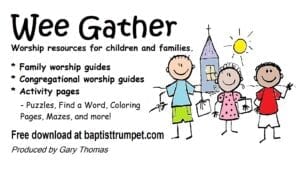